Stage Fright or Murder by the Book ~ Joan O’Callaghan

Posted on October 25, 2013 by mesdamesofmayhem

It was totally serendipitous! My friend of many years, Jane Coryell, mentioned that she was designing the set for the Village Players in Waterdown, Ontario. Knowing my love of mysteries, Jane told me the play, Murder by the Book by Mat Kelly, is about a group of women who write mysteries.

“Hello,” I said, with rather more force than absolutely necessary, “That’s the Mesdames!” We looked at each other and before long, a wonderful collaboration was born.

Put together a group of creative and murderously-minded women writers, all with their own secrets , two very pragmatic police officers, a couple of other suspicious characters and what you get? Why a murder of course. The police are intent on finding the murderer while the writing group sees this as an opportunity to learn something about police procedures. Why do the police want a rutabaga to help solve the murder?

Rutabaga? There’s only one way to find out how the rutabaga figures into it and that’s to see the production.

Murder by the Book by Mat Kelly, presented by the Village Players

And – wait for it – the Mesdames of Mayhem will be on hand at the theatre with books to sell. Of course, Thirteen, our wonderful new anthology will be featured along with several other titles published by our own intrepid group of criminally-minded women. This is a wonderful opportunity to do some timely Christmas shopping for those mystery fans on your list!

Now let me tell you about the set designer, Dr. Jane Coryell. Jane’s love affair with live theatre began when, at the tender age of eight, she saw a production of Finnian’s Rainbow. Jane has been able to combine her love of theatre with her amazing artistic talent. Since 1979, she has designed sets for over 110 productions, mostly with volunteer community theatre groups. From each play, Jane says, she still learn something ~ even after 10 design awards and 6 nominations.

I asked Jane how she goes about designing the set for a mystery. She told me that regardless of whether the play is serious, comic, or mysterious, her design process is consistent.

During her first read-through, the play is alive in her head. Often she makes thumb-nail set sketches as she reads, or else does them immediately afterwards. If the director outlines the play prior to her reading it, she does thumbnails. Invariably, they match the director’s summary vision at the end of their conversation. She re-reads the script several times, noting anything in the dialogue that refers to where, when, what happens, and who’s involved: 1/4 ” floor plans usually precede 1/4″ detailed drawings. She uses 1/4″ to fit the theatre’s diagrams. The director’s approval of her drawings leads to a 1’2″ scale fully detailed maquette (model set). The more detailed the drawings and model, the better chance everyone has of actualizing an imagined world on stage. 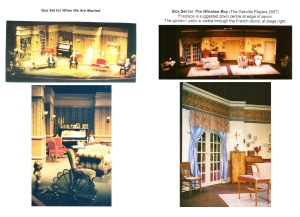 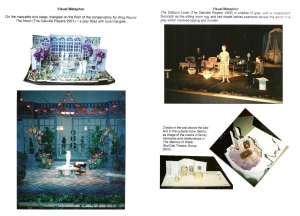 The text of the play and subtext suggest colours to convey mood, characters, or era. Occasionally, a play lends itself to a “visual metaphor” ~ an aspect of set which suggests / symbolizes the subtext. For example, Innumerable letters were spread on stage for 84 Charing Cross Road. The colour red symbolized murder in The Bad Seed. Dark tones pervaded The Crucible, all productions designed by Jane.

Jane’s magic moment happens when the whole set is on stage under lights. It looks even better than she imagined and prepared, thanks to the dedication and skills of fellow theatre lovers. For Jane, set design perfectly balances solo and collaborative creativity.
Come to Murder by the Book and see how Jane has designed a set to complement the script of the play!