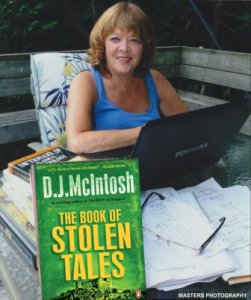 The Book of Stolen Tales, officially released by Penguin Canada on May 28th, is the second in the Mesopotamian trilogy. New York antiquities dealer, John Madison, hunts for a rare copy of a 17th century Italian book of fairy tales, the first European anthology of the famous stories that are now, so familiar to us. As Madison’s quest deepens, the dark origins of those tales seem to come to life and lead him to the ancient abode of the Mesopotamian god of the underworld.

Researching and writing this book was really absorbing and it unearthed some fascinating facts. Here are just two of the many things I learned: There appears to be strong evidence that The Pied Piper was based on an actual historical event. The town of Hamelin really exists and the picture below is a reproduction of a stained glass window in the German “Market” Church. It includes a poem describing the children’s disappearance.

French fairy tale author, Charles Perrault, set his version of Sleeping Beauty at the beautiful Chateau d’Uséé at the edge of the Chinon forest in France, not a Castle on the Rhine like the one Disney used.

Start up of book promotion promises to be a lot of fun beginning on May 23rd with a launch at the Carlton Cinemas in downtown Toronto, a reception, followed by a private screening of Jean Cocteau’s classic Beauty & The beast.

And Penguin will be releasing my short story The Winter Wolf, a new twist on Red Riding Hood, as an e-story and promo for The Book of Stolen Tales.

Many thanks to my sisters of Mayhem for giving me so much help in spreading the word!

Looking for summer read? The Book of Stolen Tales is available for pre-sale at Amazon now!

Or Pre-Order now at Chapters/Indigo

Or through your favourite Indie Bookstore!