Posted on November 12, 2013 by mesdamesofmayhem

Humour is like sex. Once you start to analyze it, you take all the fun out of it.

Be that as it may, The Mesdames have asked me to write about humour in crime and I decided to think about four of the stories in the anthology Thirteen that made me laugh. They are “Not My Body” by Melodie Campbell, “The Canadian Caper” by Rosemary Aubert, “Amdur’s Cat” by M. H. Callway and my own story, “Saving Bessie’s Worms”. Yes, I still laugh when I read my own work.

It is hard to be funny about murder, but Mme. Campbell manages. Of course she is a mistress of black humour. It helps that we never meet the victim before he turns up dead and he is a lowlife criminal whom no one will miss. The heroine, Gina, is trying to live a respectable life but her relatives with their mob connections keep involving her. In the end, like Nancy Drew, she solves the crime but unlike Nancy, she lets the criminal off. 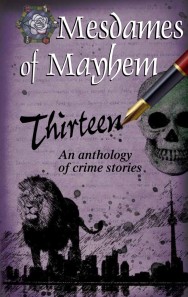 Never underestimate the power of little old ladies. I am one, so I know whereof I speak. “The Canadian Caper” and “Saving Bessie’s Worms” are both about senior citizens. In “The Canadian Caper”, Mrs. DiRosa, who lives in Niagara Falls, New York, uses a ruse to get the attention of border officials after they ignore her first warnings about people smuggling. Most memorable line: “I have come home to die.”

The ladies in “Saving Bessie’s Worms” aren’t above a little blackmail and coercion when they are faced with someone trying to get rid of their friend’s worms, an essential ingredient in the compost operation in their condo. There is an incongruity between what we expect of these nice, elderly women and the way they actually behave.

Are worms intrinsically funny? They show up again in “Amdur’s Cat”. Herb Cott, a redneck politician and a former worm seller, is bent on destroying Dr. Amdur’s government department. He gets his comeuppance at the hands of the doctor, aided by an exotic dancer, a computer hacker and a lion. (Sounds like the start of a joke.) The story is close to fantasy, but it moves so fast that you are carried along by the action. Here again, the good guys have to turn criminal to triumph.

Humour and crime both have many faces. Combining them can work, but it’s a mystery to me how it happens. Better not to analyze and just read and enjoy.

Lynne Murphy studied journalism at Carleton University and worked as a reporter on the now defunct “Ottawa Journal” and then as an editor for CBC Radio News. She has sold articles through the years, but “The Troublemaker” in the Sisters in Crime anthology The Whole She-Bang is her first published work of fiction.

Her story “Saving Bessie’s Worms” appears in the 2013 anthology of crime stories titled Thirteen by the Mesdames of Mayhem.

In 1992 Lynne helped found the Toronto Chapter of Sisters in Crime and is proud that it continues to thrive.