And Then There Were None ~ West End Studio Theatre, Feb/2014

Posted on January 24, 2014 by mesdamesofmayhem

The Mesdames of Mayhem are joining forces with the original Madame of Mayhem, the wonderful Agatha Christie via the West End Studio Theatre (W.E.S.T.) in Oakville, for their forthcoming production of And Then There Were None.

In this superlative mystery, statuettes of little soldier boys on the mantel in a house on an island off the coast of Devon (UK) fall to the floor and break one by one as those in the house succumb to a diabolical avenger. A nursery rhyme tells how each of the ten “soldiers” met his death – until there were none. Eight guests, who have never met each other or their apparently absent host and hostess, are lured to the island and along with the two house servants, marooned. A mysterious voice accuses each of having gotten away with murder and then one drops dead – poisoned. One down and nine to go!

Murder, mischief and mayhem!! This production has it all!

The Mesdames of Mayhem, who never miss out on a good mystery if they can help it, will be on hand at the theatre. Drop by our table in the lobby to chat and browse through the books for sale. How better to warm up these frigid winter nights than to curl up with your favourite beverage and a good mystery!

And Then There Were None
Performance Dates and Prices: 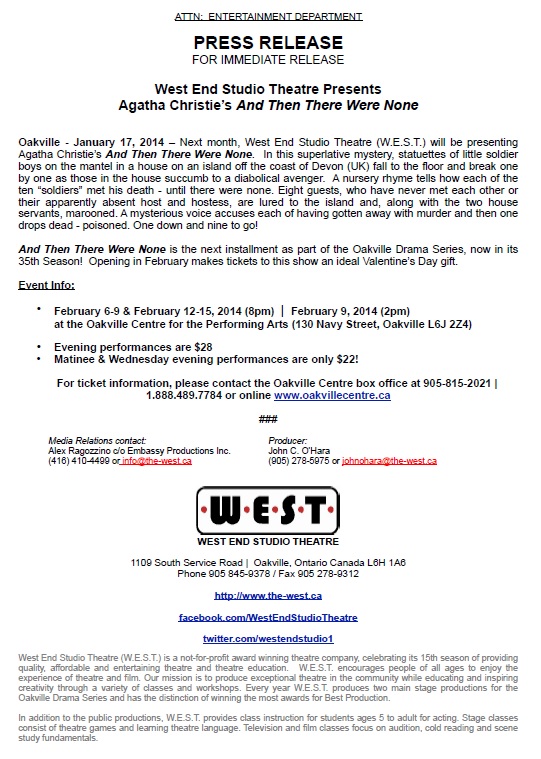 This entry was posted in Uncategorized and tagged Agatha Christie, And Then There Were None, authors, Canadian authors, crime, Crime Writers of Canada, drama, mesdames of mayhem, mystery, play, theatre, Thirteen, writers. Bookmark the permalink.