Posted on February 1, 2016 by mesdamesofmayhem

On Jan. 21st the Mesdames of Mayhem were out in force to support their colleague, Mme. Joan O’Callaghan at the launch of her late husband’s book, Maverick Publisher.

Joan O’Callaghan endured several sleepless nights worrying about everything from whether the cheese tray would be sufficient, to finding a parking space, as she prepared to host the launch of Maverick Publisher. She needn’t have worried. The launch proceeded without a hitch.

Approximately 50 guests gathered in the Venn at the Rogers Communication Centre, Ryerson University to celebrate the posthumous publication of J. Patrick O’Callaghan’s memoirs.  As O’Callaghan’s widow, Joan pointed out in her remarks, the crowd not only celebrated the memoirs, but in so doing, honoured O’Callaghan’s memory and preserved his legacy.

MC for the evening was Globe and Mail columnist, Margaret Wente.  Wente pointed out that the launch was timely, given the announcement that week that several newspapers in the Postmedia stable would amalgamate, with the loss of numerous industry jobs.  The company, Wente commented acerbically, is owned by a US hedge fund that places a higher premium on toothpaste than on news media.

Wente’s praise for J. Patrick (Pat) O’Callaghan as a “giant in Canadian journalism” was echoed by guest William Thorsell, former editor-in-chief of The Globe and Mail, and more recently CEO of the Royal Ontario Museum, who had been trained and mentored by O’Callaghan at The Edmonton Journal.  Thorsell reminisced about being told by O’Callaghan that the worst thing a newspaper could be was a 5-letter word, “BLAND.”

Among the guests was Keith Kincaid, retired president of the Canadian Press, whom O’Callaghan credits with positioning the news collective to face the challenges of the 21st century.

After reading from the memoirs, Joan O’Callaghan encouraged the guests to do exactly as Patrick O’Callaghan would want them to do – eat, drink, and enjoy themselves. 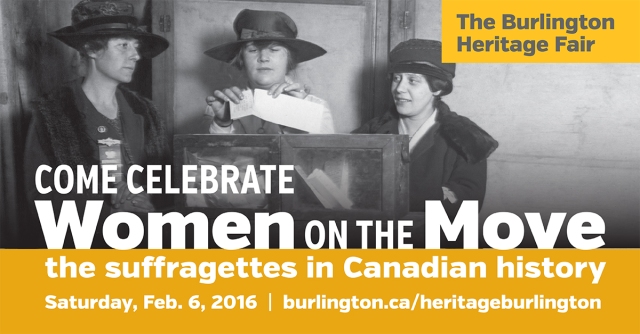 The event celebrates the 100th anniversary of the Women’s Suffragette Movement. The Mesdames are honored to be invited by the organizers. At 2:00 pm, they will give a panel on the challenges facing women crime writers in a male-dominated genre.  Their books will be available for sale all day at the Mesdames of Mayhem booth.

Join the Mesdames at this great event at the Burlington Central Library, Centennial Hall, 2331 New Street, Burlington from 10 am to 3 pm.

Later in February, Mmes Jane Burfield, M. H. Callway and Melodie Campbell will be attending Left Coast Crime, Phoenix, Arizona together with several of Canada’s leading crime writers. In addition to serving on panels, on Friday, February 26th, they will be part of the “Meet the Canucks” CWC event to promote Canadian crime writing to American authors and fans. Full write-up in March.

Mme. Rosemary McCracken is teaching Novel Writing II: Developing Your Novel at George Brown College through March 29. The class is scheduled to repeat during the spring semester, starting April 12th.  Follow the link  and check back in March for the details.