This month, Mme. Catherine Dunphy, shares her experiences volunteering with the Out Of The Cold program. Mme. Dunphy  was nominated for a Governor General’s Award for her biography, Morgentaler: A Difficult Hero. 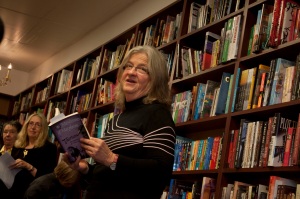 Maybe it ‘s because I was embarrassed. My neighbours — some of them– fought hard and dirty to try and stop an Out Of The Cold program from starting up at the huge Tudor-style church at the end of our street. When their battle made the papers (front page and just before Christmas) we were described as a “toney” Beach neighbourhood determined to keep out twelve — count ’em — homeless people.

Maybe it’s because I was feeling guilty. As a Toronto Star reporter, I was the first journalist in Canada assigned to a homelessness reporting beat. My idea. My bosses and I believed that all we had to do was raise awareness — show people the hidden homeless, the aboriginal homeless, the addicted homeless, the runaway teen, battered mothers — and governments would act, all would be well and no one would ever have to sleep on a street grate again.

I had long since left the beat (which was dissolved with its mission not accomplished) when I signed on to volunteer at the Out of the Cold program at St. Aidan’s Anglican Church. Hey, with my creds, I figured they would certainly want me, But there were literally hundreds in my community who also wanted to work there and I waited until the second winter before being accepted. I figured out why after I got my assignment. I had the job of monitoring the line-up outside. The idea was that the neighbours who were still fighting the program and on the alert for any misdemeanors, would see me — one of their own — and cease and desist.  Which eventually did happen, but not because of me.

Always the lineup started hours before the doors opened at 4 pm, a fact noted by the OOTC foes who complained that the motley men were upsetting to the daycare kids or anyone on their way to the beach.  What they didn’t notice was the system  — worked out by the guys themselves. Every week, a genial, gentle homeless man named George, wearing a tuque, was first in line. Always he brought with him a wrinkled scrap of paper and a pen.  Every week, he wrote numbers down on the paper.  One to twelve.  Then to 16, 20, finally 25 — as the program grew. The men (and yes, a few, but very few women) signed up as they arrived. The paper and pen were kept in a tin can by the side of the door. They respected the system. They didn’t cheat it, didn’t scratch out a name at, say, the #3 spot, and insert their own. Didn’t pretend they’d signed in when they hadn’t.

George always stayed close to the door but a lot of the guys signed in on the scrap, then took off. They were well aware they were under neighbourhood surveillance. As long as they were back by 4 pm they had their bed.  After that,  the chances were good that someone else would fill their spot.  They were pretty motivated to come back.  The St. Aidan’s OOTC was getting very popular in the homeless circuit, becoming known as a culinary hotspot. Local businesses seemed to be in competition as to who could donate the most — and the tastiest — food. And that was just for the afternoon snacks. Every week, different groups cooked up feasts for 65, after a lot of people started coming round just for the food. Those who got a bed also got a huge hot breakfast and a packed lunch.

While waiting for all this, a surprising number ended up in the green leather chairs in the library reading the day’s newspapers. Once I saw one of “our guys” (as I called them; the official OOTC term is “guests”) reading A  History of Sugar, a book written by Elizabeth Abbott, a friend of mine. I was thrilled. So was she, when I told her.

But look, some used to go for beers — especially if the welfare cheques had come in. A few of them wouldn’t make it on time and would pound on the locked door late at night. Others returned too loud, too boozed up, too ornery to be let in. Some showed up with rolling, drugged-up eyes demanding but never getting shelter. Lots of the volunteers learned how to diffuse these situations, but there were what I call flash fights, the kind that come out of nowhere. Savage. Not that many, but it only takes one to endanger the program. Or a guest. One winter someone smashed in the window on a side door to the church. A few years ago, one fight involved the jagged edge of a bottle.  You called the cops for these.

Not my guys.  Like George, they stayed on the church grounds most of the afternoon. We’d talk. Nothing heavy or too personal,  just stuff about the weather, the Leafs or something from the news — the way you’d chat with any neighbour. Sure, they smelled, some of them, their nails and knuckles caked in grime –and they glared at you and were furtive and often so on edge they were like a powder keg,  but they also raked and bagged leaves in the fall and cleared the sidewalks of snow and ice in winter.

It was hard for the OOTC foes to complain then. So they pretty much stopped.

Several years ago, we began to let the guys inside the church an hour or so early to wait for the program doors to open. They never complained — never — but there were too many days when it was simply inhuman to be out in the cold, waiting. Besides, they had proven themselves. When we started the new system of having them line up in the basement hallway where we offered them hot chocolate and biscuits, we also tried giving out numbered tickets. But they didn’t like it and, really,  we didn’t either. Their way — George’s way — was still the best. So once again they signed their names on George’s scrap of paper with George’s pen. They waited for  4 pm, when I would call their name and number so they could enter the room, two by two, register, pick up their bedding and claim their bed. No pushing, no shoving, no queue jumping. But if I called out the wrong name to a number, oh boy, did they correct me.

Two winters ago, things changed again. George was not at the head of the line. Some time between the end of the OOTC program in April and its startup in November, George had died. All of us at the St. Aidan’s OOTC were devastated. Strange but you start to count on seeing the same old faces every season.

There’s a framed picture of George in his tuque on top of the fridge in the room where the volunteers leave coats and purses. I always stop and look at it.

A really nice guy named Richard is always at the head of the line now and brings the paper and pen. He was a friend of George; he knows how to carry on.

1 Response to Mesdames of Mercy Part 3