Posted on December 31, 2016 by mesdamesofmayhem

The Mesdames sponsored and attended numerous book launches, readings and public events in 2016.  Our highlight of the year was Sept 25th at Word on the Street, Toronto’s classic book fair in support of writers, readers and literacy. We had our booth for the first time, WB 12 in Writer’s Block. These photos show what a great time we had meeting readers and selling our books! 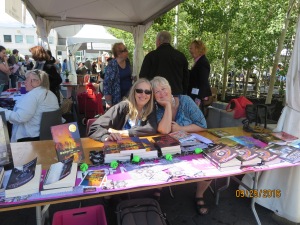 Altogether the Mesdames had ELEVEN new books published and nearly half a dozen short stories in the anthologies, Black Coffee, Pac ‘N Heat and the latest Sisters in Crime, The Whole Shebang 3. (For details on our latest books and stories, read our Christmas blog, Happy Holidays from the Mesdames.)

A big highlight was the April 28th launch of our Queen of Comedy, Melodie Campbell’s latest mob crime comedy, The Goddaughter Caper.  We had great fun dressing appropriately for the occasion as you can see in these photos below. Over 50 people attended and $400 was raised for the Hamilton Literacy Council. 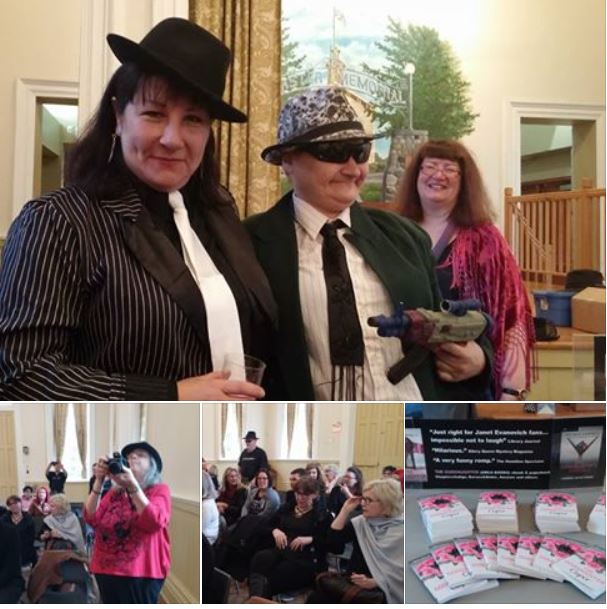 Especially touching was the thank you speech given by the winner of the costume contest, top photo, centre, next to Melodie.  She singled out the Gina Gallo series for giving her the gift of reading.

A big hug and our even bigger thanks go to Sleuth of Baker Street, our favorite bookstore, for their longstanding support of Canadian crime writers and books by the Mesdames of Mayhem.  On June 25th, when many might have spent the Saturday afternoon at the cottage or the beach, a crowd of well-wishers packed the store to celebrate Rosemary McCracken’s latest Pat Tierney mystery, Raven Lake.

On November 6th, Rosemary Aubert, M. H. Callway and Donna Carrick filled the store to capacity for their fabulous Trifecta launch  of their short story collections, The Midnight Boat to Palermo, Glow Grass and Other Tales and North on the Yellowhead.

The three authors are delighted to report that they each sold out their supply of books that same day – and had to order more for their readers!

On November 27th, Lisa De Nikolits, Lynne Murphy and Ed Piwowarczyk were among the authors who attracted another sold-out crowd to Sleuth for the launch of the  Toronto Sisters in Crime’s latest anthology, The Whole Shebang 3.

The Mesdames gave dozens upon dozens of readings as part of our group, through the Crime Writers of Canada and as individuals.  We’re especially proud of Rosemary Aubert, who was the featured speaker at the January 30th annual Blue Carbuncle Awards dinner of the Bootmakers, the Toronto Sherlock Holmes Club.

We’re equally proud of Melodie Campbell, who on June 17th was the Guest of Honour and Keynote Speaker at the Ontario Literacy Conference, Mohawk College, Hamilton. Promoting literacy is Melodie’s passion: be sure to read her Christmas blog about the hardships faced by people who have difficulty reading and writing.

Lisa De Nikolits toured the Maritimes and Newfoundland to promote her new book, The Nearly Girl, where she was a guest at the Saint John FogLit Festival and had a wonderful stay at the author’s retreat at the National Water Centre. Read more about her adventures in touring here.

We owe a huge debt of thanks to our hard-working librarians in Toronto and the GTA for their support of Canadian crime writers and the Mesdames of Mayhem.

Ghodsi Danesh, of the Mt. Pleasant Branch, hosted the Mesdames twice this year on March 8th and on October 18th. And we look forward to our follow-up event next April!

Another big highlight was the reading organized by librarian Maria Samurin of the Albert Campbell Branch as part of the series, Authors Nights. 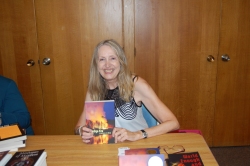 Seven of us read to a packed auditorium of enthusiastic readers and writers, many of whom belong to the Scarborough Scribblers. It was a privilege to be able to share our collective knowledge and experience with such a supportive audience.

The Mesdames were also invited to be part of the Burlington Heritage Fair on February 6th, celebrating the Suffragettes in Canadian History.  M. H. Callway, Melodie Campbell, Rosemary McCracken and Joan O’Callaghan were honoured to represent the Mesdames.

Several of us received positive, formal recognition of our work in 2016. Lisa De Nikolits’ 2015 book, Between the Cracks She Fell, won the  IPPY Bronze Medal for Contemporary Fiction.

Caro Soles and her co-editor, Nancy Kilpatrick, received a nomination for the Bram Stoker Award for Best Anthology for their Poe-tribute story collection, nEvermore.

Cheryl Freedman continues her wonderful work to promote and sustain light mysteries through the annual  Bony Blithe Awards – the mysteries that make us smile. Submissions closed on Dec 15th and we look forward to learning the shortlist early next year!

And finally a BIG THANK YOU to all our readers who made 2016 another wonderful year.

HAPPY NEW YEAR FROM THE MESDAMES!!