Learn With the Mesdames Part 5

This is another in our series on Mesdames who teach and also learn along with their students. This month we feature Mme. Rosemary McCracken, author of the Pat Tierney series. Rosemary’s most recent book is”Raven Lake” and she is at work on a fourth book in the series. She is also the author of numerous short stories, including The Queen-sized Bed which will be included in the  2017 Bouchercon anthology,  A Passport to Murder. 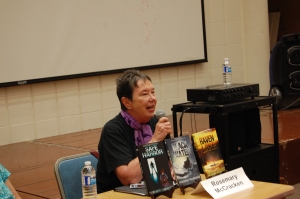 I’m several weeks into teaching Novel Writing II: How to Develop Your Novel in George Brown College’s spring program, and it’s one of the best classes I’ve ever had. The course is designed for adult writers who have started or are seriously planning a novel. Most have taken the college’s Novel Writing I: How to Start Writing Your Novel or an equivalent. The current class is a perfect size: eight committed students. They’re tackling crime fiction, romance and women’s fiction. No vampires or post-apocalyptic works—just as I was getting quite attached to those vampires!

When I was a student…

What I find so cool about teaching novel writing at George Brown is that, back in the 1990s, I was one of these students. Up to that point, I’d dabbled in fiction writing, but I needed a big push to commit to learning the craft. Ironically, that push came in the form of a course on how to make sense of investments, financial statements and taxation.

I had just started an editing position on the news desk at the Financial Post, and it had been strongly suggested that I take the Canadian Securities Course, the first step in training to become a financial planner or an investment manager. It’s a gruelling course, especially if you have a full-time job. For six months, when I wasn’t at work I was seated at my dining room table working on assignments and studying for a marathon three-hour final examination. I became thoroughly sick of my seat at that table and my view of the dining room wall. But as the final exam loomed closer, I vowed that when it was all over I would continue sitting in that chair—but working on something I’d always wanted to do but never committed to: writing fiction.

The CSC exam was held in the spring of 1992. To celebrate the end of the course, I enrolled in a creative writing course at George Brown College that started the following week.

Over the next few years, I took several of the college’s writing courses: short story writing with Nancy Kilpatrick, novel writing with Caro Soles, mystery writing with the late John North and dialogue writing with Nika Rylski. All terrific teachers and I learned a lot from them. I even saw my first short story published in the Winter 1996 issue of Room of One’s Own magazine (now titled Room).

And Now a Teacher

In 2003, I returned to George Brown as an instructor, teaching writing for magazines. I left after two semesters to devote more time to writing fiction.

I look at my class this term and I remember how I felt as a George Brown student: hesitant and unsure, wondering if I was attempting something I wasn’t cut out for. But there was always the hope that I’d make it.

The publishing landscape has changed enormously since then. Publishers have merged and dissolved, and few major publishers accept new writers. But a number of small publishing houses have emerged in recent years, and self-publishing is now an option.

Writing requires a long-term commitment and a thick skin. I’ve seen many writers give up. Financial, family and health reasons prevent some from continuing to write. And many grow frustrated with having their submissions rejected by agents and publishers.

I address this in my class. I share stories from my writing journey. I tell my students to consistently do the work of writing their stories and novels, and not compare themselves with others who seem to be getting ahead more quickly. Every writer has his or her own pace, and some stories take longer to tell than others.

I tell them to set achievable goals for this class. I suggest they aim to complete their novel’s outline, write another 100 pages, and have five to eight pages critiqued in every class. That’s a lot of ground they can cover in 12 weeks.

Just as my teachers spurred me on, my job is to motivate my students to keep doing the work now and in the years ahead. Because that’s the way writers become authors.

3 Responses to Learn With the Mesdames Part 5