WOW! WHAT A LAUNCH!

Posted on November 18, 2017 by mesdamesofmayhem

The launch of 13 Claws on Saturday, October 28th was a huge success. And here are the promised pics and write-up of our event! 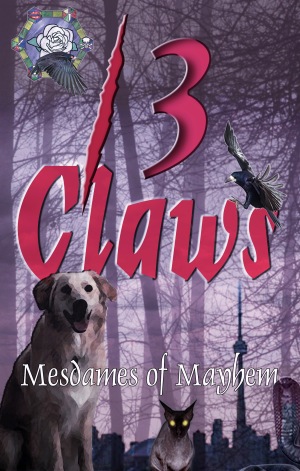 Sleuth of Baker Street was the place to be on Saturday, Oct. 28th when the Mesdames of Mayhem, their families, friends and fans gathered to celebrate the launch of our third anthology, 13 Claws.  And the birthday of our webmistress, Lynne Murphy!

Our thanks to store owners, Marian Misters and J. D. Singh, for hosting the party. We didn’t take a head count but the bookstore was full to overflowing at times. Traditionally our book launches are held close to Hallowe’en and the décor and costumes were in tune with the season and the animal theme of the book. 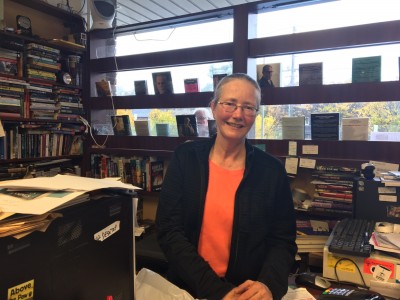 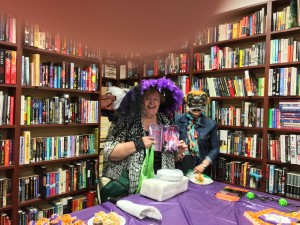 Melodie Campbell, Our Queen of Comedy 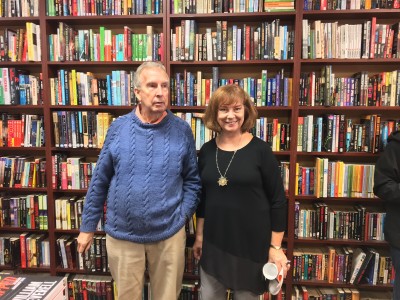 The Mesdames took the opportunity to thank our founder, Madeleine Harris Callway, our editor and publisher, Donna Carrick, and our copy editor, Ed Piwowarczyk, for their hard work in making the book a success. 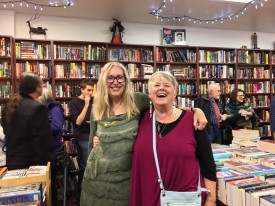 Mega thanks to our publishers, Donna and Alex Carrick!

Rosemary Aubert and our friend and fan, author Joe Lewis 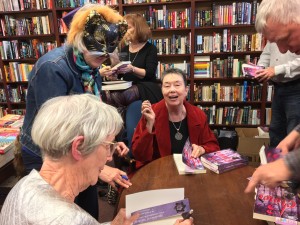 All the Mesdames were able to attend and we were happy to welcome three new authors, Mary Patterson, Rosalind Place and Marilyn Kay. Mary was the winner of our contest for unpublished mystery writers and Rosalind and Marilyn were the runners up.

With Catherine Dunphy as M.C., each of the Mesdames read a short excerpt that best represented their story. It’s surprising how tantalizing a few paragraphs can be. Cats, nice and nasty, were the favoured animals, from Rosemary Aubert, Rosemary McCracken, Lynne Murphy and our three new authors, but Catherine Astolfo was the only writer to feature a pig. M. H. Callway, Lisa De Nikolits and Ed P favored snakes and a fish while Jane Burfield and Cathy Dunphy wrote about dragons and animal crackers, respectively. Our faithful companions, dogs, were the heroes in the stories by Mel Campbell, Donna Carrick and Sylvia Warsh.

Rosemary McCracken’s latest blog highlights the paragraphs each of us read. Do check out her report for more pictures and details of our launch, too! Follow this link.

The best news comes from Marian Misters, who reports that Sleuth has sold out its original order and needs more copies. A terrific start for 13 Claws!