LEARN WITH THE MESDAMES PT.2: Scary Stuff, Kids! Tips on Talking to Schoolchildren

Posted on February 13, 2017 by mesdamesofmayhem

The deadline for submissions by authors previously unpublished in crime fiction  to 13 Claws is barely a month away on March 15, 2017.  Check the tab on this website for submission rules!

This week, Mme M. H. Callway reports on her latest adventure: presenting her thriller, Windigo Fire to a classroom of Grade 8 students. You have to stay scared to stay sharp. Here she shares some tips on staying ahead of the class!

How did this adventure come about?

Our good friend, Steve, approached me about doing a talk at his son’s school.  I said yes then thought: what did I just do? What’s scarier than facing sixty 13-year-olds trapped in library class. Well, erm, nothing!

Steve’s son, Francis, had picked my novel, Windigo Fire, as his Canadian novel for his school book report. His English teacher, Ken, read it and loved it – and so did some of Francis’s classmates. When Ken  invited me to meet his students to talk about my book and the life of a writer, I couldn’t say anything but YES! 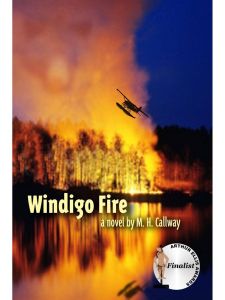 I was a little worried that I might be playing Officer Stodenko to Ken’s Sister Mary Elephant (see Cheech and Chong in Wikipedia, younger readers), but it turned out to be one of the most rewarding experiences I’ve ever had as an author. Good thing though that I could draw on my experience as a retired management consultant doing focus groups, seminars, sales pitches, etc. and winning over skeptical clients.

Here are some observations and tips for the unwary author embarking on their first school talk:

Remember how Harry and Marv, the two bungling burglars were outwitted by 8 year old Kevin in the movie comedy, Home Alone? Because the burglars thought kids were stupid. Do not underestimate the tough, intelligent and insightful questions kids will throw at you. They have no qualms about asking you how much money you made on your book, why you write for so little money, why you let publishers tell you what to do, why you don’t just self-publish and so forth.

Tip: Be prepared for hard-nosed questions and have your answers ready!

There’s nothing worse than a disinterested audience. Silence is deadly. Kids are shy at first. After all, you’re a grown-up and a figure of authority. I broke the ice right away by asking the class who wanted to be a writer. Who was working on a book right now? It didn’t take long to unleash a flood of questions.

From the kids’ point of view anyone over 25 is O-L-D. At the same time, kids respect anyone who really knows their stuff, is confident and doesn’t talk down to them. Assure the kids that you value their opinions and that you consider every question they throw at you to be a valid one.

I found that making the session an interactive one worked really well. Lectures don’t work in our digital world where attention spans are short. I bled the info out to them by answering “long” to certain questions like: “Who decides what your book cover will look like?” And occasionally, I tossed a question back to them.  For example, they asked “How did J. K. Rawlings get rich?” So I asked them what they thought. It surprised them that they already knew the answer. (Hint: It’s movie rights.)

Tip: Try to answer every single question. A challenging question often leads to a good discussion.

You will learn as much from the kids as they do from you. I learned that they read almost exclusively on I-pads. E-readers are passe, but printed books are still cool.

I never dreamed that Windigo Fire could work as a YA read, but the kids loved it. But then I realized that my protagonist, Danny is young and my second protagonist, Rachel is a 10-year-old kid. To my surprise, their favorite character was Santa, one of the villains. I really enjoyed giving Santa a hard time when I wrote the book – he fails at driving a Prius and he’s outfoxed by Rachel – and the kids did, too.  It was a no-brainer which section I chose to read to them.

Tip: Keep an open mind and you will be happily surprised by what you will learn.

Tip: Give students a choice about which pages you read.

One reason my visit worked so well was because of Ken, the teacher. We planned the session together and he kept things moving by throwing in a comment or a question. Teachers can also rein in some of the more extroverted students.  Ken is working on a children’s book so it was great to meet and exchange information with another writer.

Tip: Plan your visit with the teacher beforehand.

At the end of my talk, the students presented me with a wonderful card they had all signed and a keepsake globe. A new world really awaits.