Meet the authors of Thirteen O’clock!

Posted on September 14, 2015 by mesdamesofmayhem

M. H. Callway is the founder of the Mesdames of Mayhem. Her debut novel, Windigo Fire, received very positive reviews and was a finalist for the Arthur Ellis Award for Best First Novel.

Her short story, “The Ultimate Mystery”, was a runner-up for this year’s Derringer award.

In, 13 O’clock, her suspense story, “Glow Grass”, shows the danger in returning to your derelict family cottage….

Mme Melodie Campbell is our Queen of Comedy. Critics have compared her work to Janet Evanovich.

Mel is a prolific writer of short stories and novellas. Her hilarious Goddaughter series won both the Arthur and the Derringer awards. Her most recent novella, The Artful Goddaugher, is available on Amazon.

In 13 O’clock, Mel’s two flash fictions, “Perfect Timing” and “The Test of Time” offer a glimpse into the sinister side of planning…. 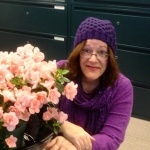 Mme Donna Carrick and her husband, Alex Carrick created Carrick Publishing, which now carries dozens of critically acclaimed authors and titles. Donna is a recognized novelist herself. Her short story, “Watermelon Weekend” was a finalist for the Arthur Award.

Authors in Carrick Publishing’s anthology, World Enough and Crime,  were nominated for the Arthur and Derringer Awards.

In 13 O’clock, her story, “The 14th of Forever”, shows the anguish of lost time…and the importance of planning.